MADDhouse #3,
Behind the fear

Throughout our lives, women, or people with vaginas, will visit the gynecologist multiple times. The Public Health recommendation is to do it every 1-3 years, depending on individual circumstances, however, more than 50% of women will not follow this recommendation. It is not news that almost no woman likes going to the gynecologist. Unfortunately, feeling anxiety, fear, vulnerability, shame, and discomfort are part of the common experience of many women when visiting this specialist. But, why do we experience it this way?

The lack of sensitivity and empathy towards a patient in an extremely vulnerable position, the judgment, infantilization, paternalism, the lack of scientific advancement, misinformation, the taboo or normalization of female pain are some of the subtle forms of patriarchal violence that women suffer in relation to our intimate health. A violence that occurs in a medical context where, apparently, the values ​​of care and attention prevail, and where precisely the opposite of violence is expected.

Gynecological violence affects half the population, it is a complex and systemic problem in which a multitude of factors intervene and in which we all participate more or less consciously. This exhibition seeks to detect and denormalize these situations as an indispensable first step for change.

The gynecological visit differs from any other medical examination due to the high level of vulnerability to which patients are exposed. Of course, it is not the same to talk to a doctor while dressed and sitting at a table, than to do it naked, with your legs spread and without seeing how a stranger manipulates tools in your vagina.

Vulnerability awakens in our mind the same response as a physical threat; we interpret the lack of control of the situation as a danger and we become extremely sensitive. For this reason, the gynecological examination requires a high degree of empathy, respect and care on the part of the professionals, to avoid hurting or discomforting the person treated.

However, too often, women experience a lack of sensitivity from their doctors, judicious treatment, contempt and even discriminatory treatment according to their sexual practices or orientation.

The Most Uncomfortable Moment

This first piece invites you to sit down, open your legs in a gynecological-examination position and, from that position, read the testimonies that appear projected.

These are real testimonies collected in an investigation where 82 women participated, who relate some of the most uncomfortable moments they have experienced in a gynecological consultation related to the behaviour of the professionals attending them. 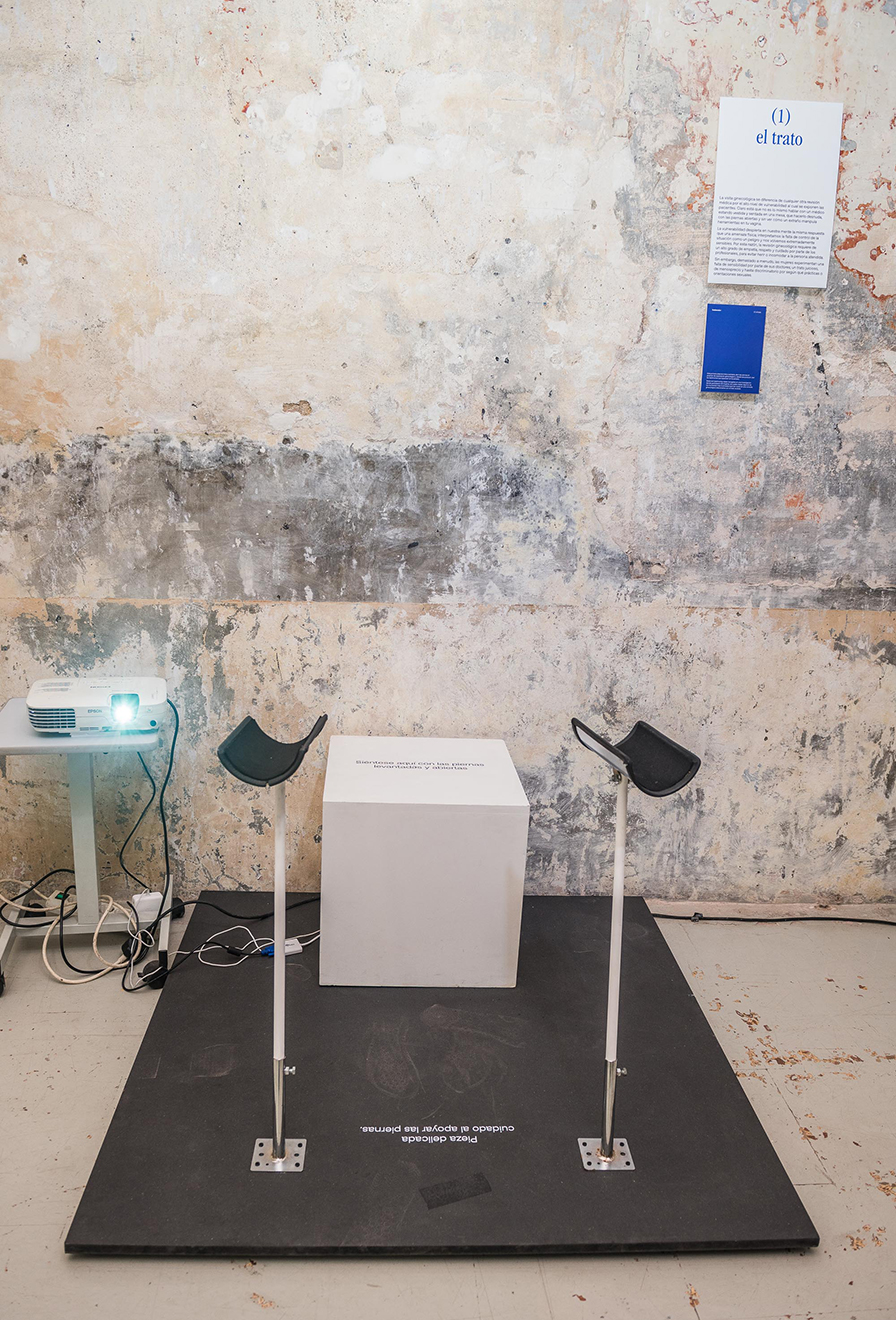 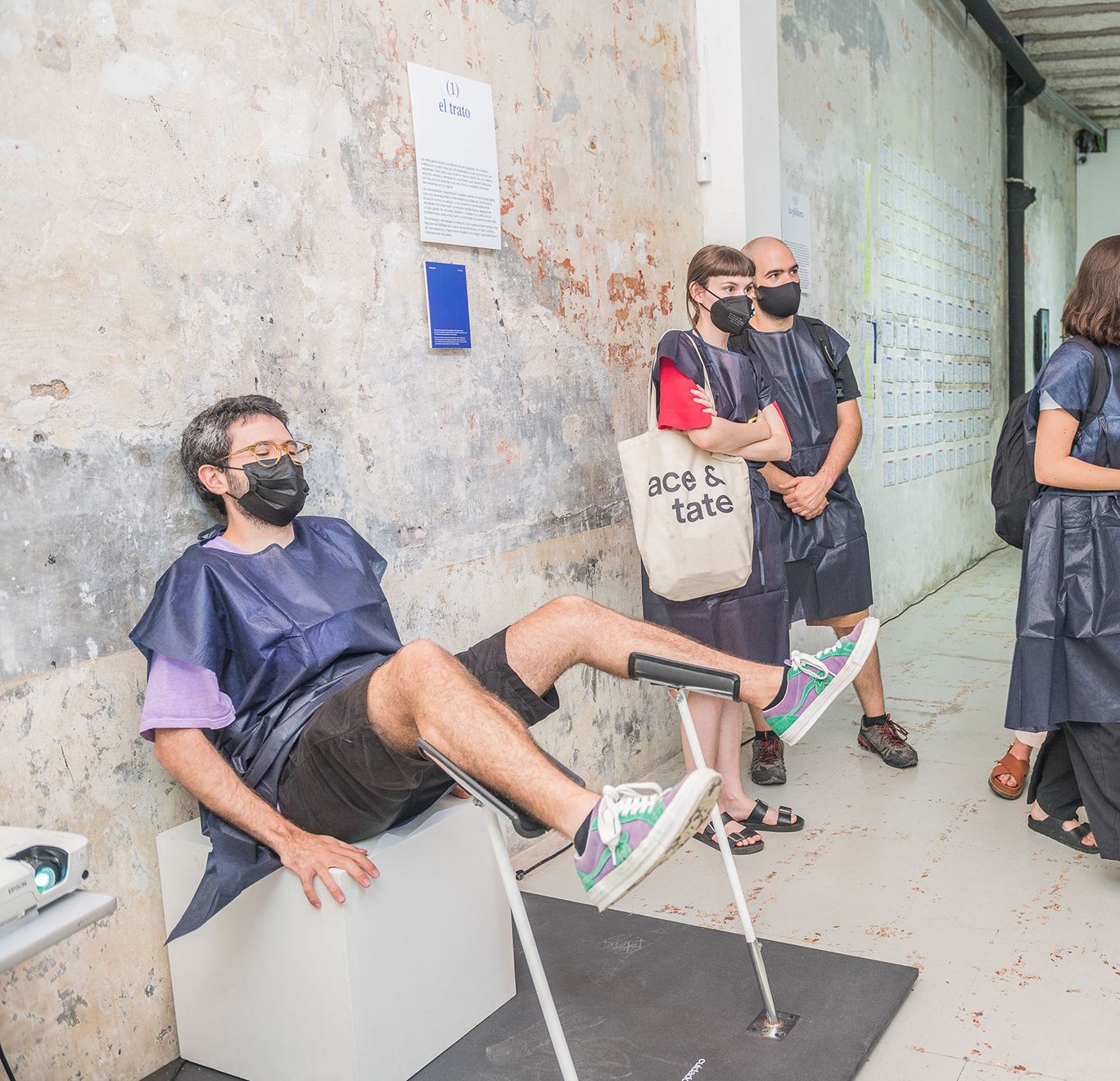 The vaginal speculum is an instrument used for gynecological examinations that allows, by dilating the walls of the vagina, to observe the cervix. This characteristic tool, with a look similar to a torture weapon, was invented less than 200 years ago by Marion Sims, known as the “father of modern gynecology”. Despite all its benefits, the speculum has an obscure origin, connected to patriarchal authority and institutional racism, as Sims used black slaves for years to perform experimental surgeries without anesthesia. From the first model used by Sims and later perfected by Thomas Graves in 1870, the instrument has hardly changed.

Currently, regarding its most practical function, the speculum is a tool that does its job and does it well, allowing the pap smear (a test that in recent years has reduced the incidence and mortality from cervix cancer up to 70-80%). However, the speculum has barely changed in its 200-year history and remains a poorly suited design for the patient’s comfort.

Revising the speculum
This chapter of the exhibition focuses on the ideology and politics that objects hide behind their design, beyond their utilitarian character. Through speculative sketches, we reflect on the speculum and how it materializes a patriarchal vision that does not prioritize the comfort of the patient, an object lacking in evolution that, in the hands of doctors, represents authority and power. 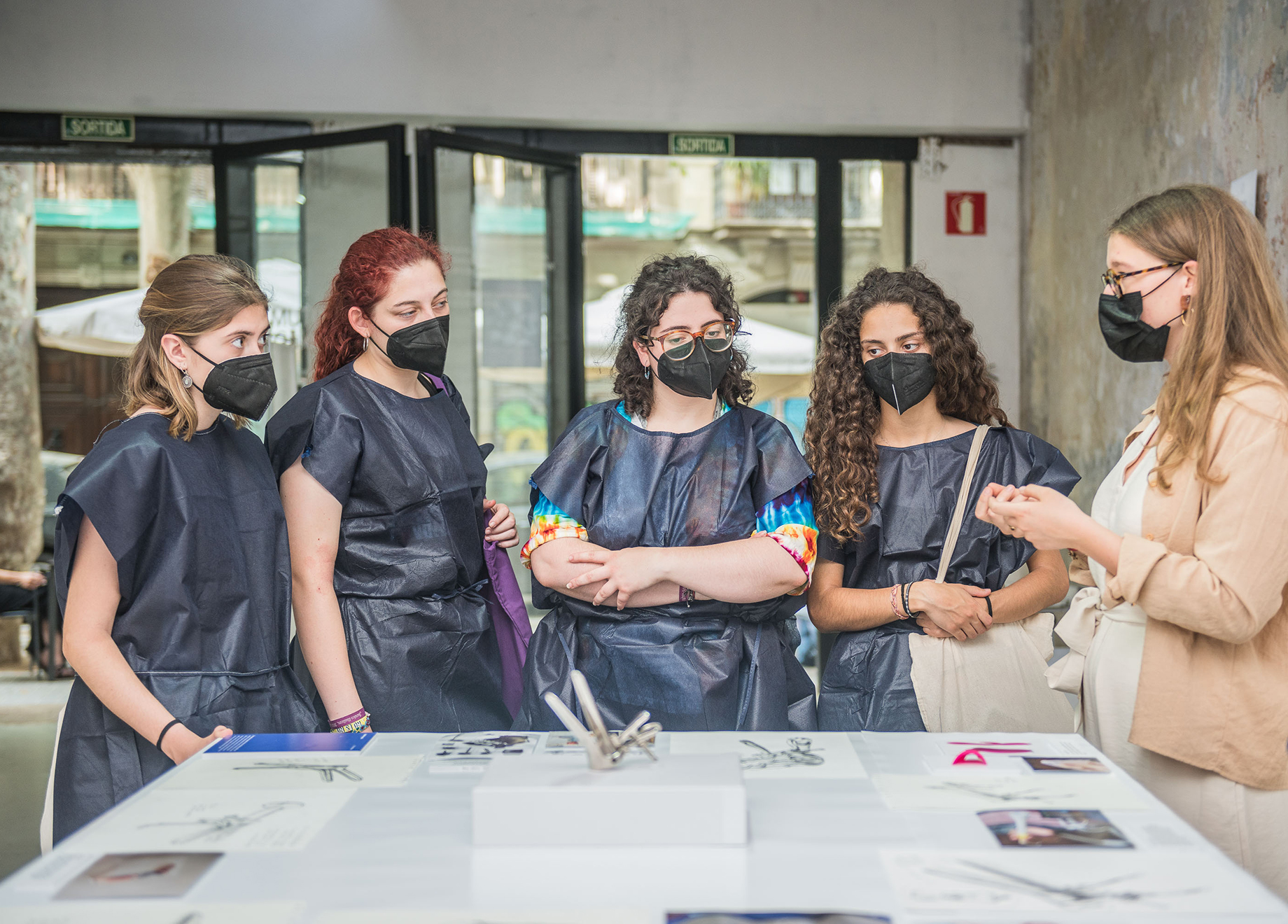 Reaction to the speculum
The design and appearance of the speculum, as well as the experience of patients who have used it, make it one of the most hated instruments. This interactive piece displays the most common reactions when viewing this device. When opening the speculum you will see a word accompanied by the number of people who wrote it in response to the open field question: “What word comes to mind when you see this device? (followed by an image of a speculum). “

These are some of the other words indicated:

3. The Pill
The contraceptive pill has been one of the most popular and revolutionary drugs of recent decades, as well as one of the most controversial. The first mass-use drug for non-sick people also has a sordid origin linked to colonialism. The first trials of the American pill in the 1950s were carried out in Costa Rica for eugenic purposes of population control in poor women who agreed to take the pill and suffered serious side effects, without being aware that they were part of a pharmacological experiment.

Since then, millions and millions of women have taken this combined progesterone and estrogen hormonal drug, currently 150 million people worldwide. Despite its positive effect on the movements for sexual liberation and female emancipation, the history of this pill continues to be marked by a lack of consent, of full disclosure, of a truly informed choice, as well as a lack of clinically relevant research regarding risks and possible alternatives.

Side effects
According to a study done in the USA, three out of every five women stop taking the pill during the first year of use due to its side effects. Mostly, effects about which patients are not informed. Side effects ignored by everyone, unlike other drugs. For example, the risk of thrombosis of the pill is 0.1% (1 in 1000), which has not been an impediment to its commercialization, on the contrary, the risk of thrombosis in the vaccine against Covid-19 Astra Zeneca, which is only 0.0006% (30 out of 5 million), meant stopping vaccination worldwide for a few weeks. 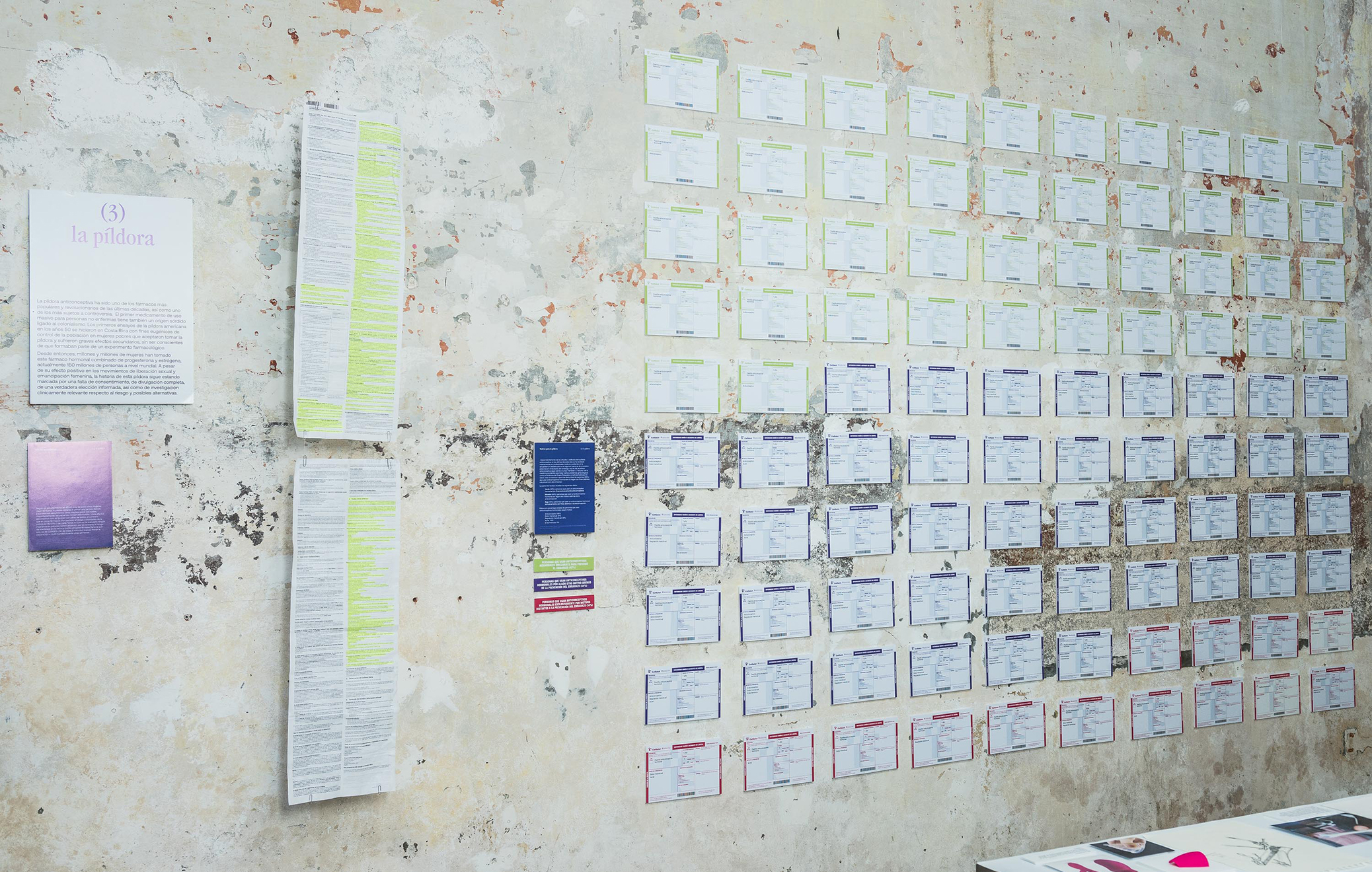 Reasons to take the pill
Regardless of the virtues or defects of the contraceptive pill, in recent decades it has been massively prescribed by medical professionals, and there is currently a debate about whether in some cases there is an unnecessary over-prescription. However, today, the contraceptive pill remains the only “remedy” or “resource” in Western medicine to treat certain gynecological problems such as Polycystic Ovary Syndrome or Endometriosis. In data, this means that more than half of people (58%) who use hormonal contraceptives do so for purposes other than preventing pregnancy.

— 44% of people who use a hormonal contraceptive do so for some other reason additionally to contraception.

These are the total percentages of people who use hormonal contraceptives by reason:

Ignoring and normalizing women’s pain is another form of gynecological violence. In a 1974 study medical students reported that they had been instructed by their professors to assume that women’s ailments are psychosomatic until proven otherwise. Unfortunately, today there are still traces of that thought that belittles the pain that comes from a woman.

In the case of menstrual pain, its normalization also extends outside the gynecological consultation, in general society. 51% of women and 52% of men believe that period pain is something that women have to deal with. However, menstruating is a physiological need just like eating, and shouldn’t hurt.

Menstrual pain
Silence, normalization and ignorance of menstrual pain run deep and have serious consequences. Although menstruating should not be painful, the data shows that a high percentage of women suffer periodically from period pain. This piece visualizes and contrasts some real events – the percentages of women suffering from dysmenorrhea and endometriosis – with the normalization of this pain – represented through objects commonly used as a “remedy” for pain. By lifting these objects, we discover the consequences of such normalization.

The strong paternalistic tradition of Western medicine is accentuated in gynecology. The fact that the patients are women and the widespread misinformation about our own bodies due to a lack of education, makes this form of authoritarianism very present. To this day, there is still a strong hierarchical relationship between doctor and patient, where many times the former imposes and decides for the latter, without giving explanations. In this way, the figure of the medical savior and the infantilization of the ignorant woman continue to be perpetuated.

This paternalism is a direct consequence of the patriarchal system and extends beyond the individual attitude of medical professionals, as it is also exercised by the State through laws and policies. 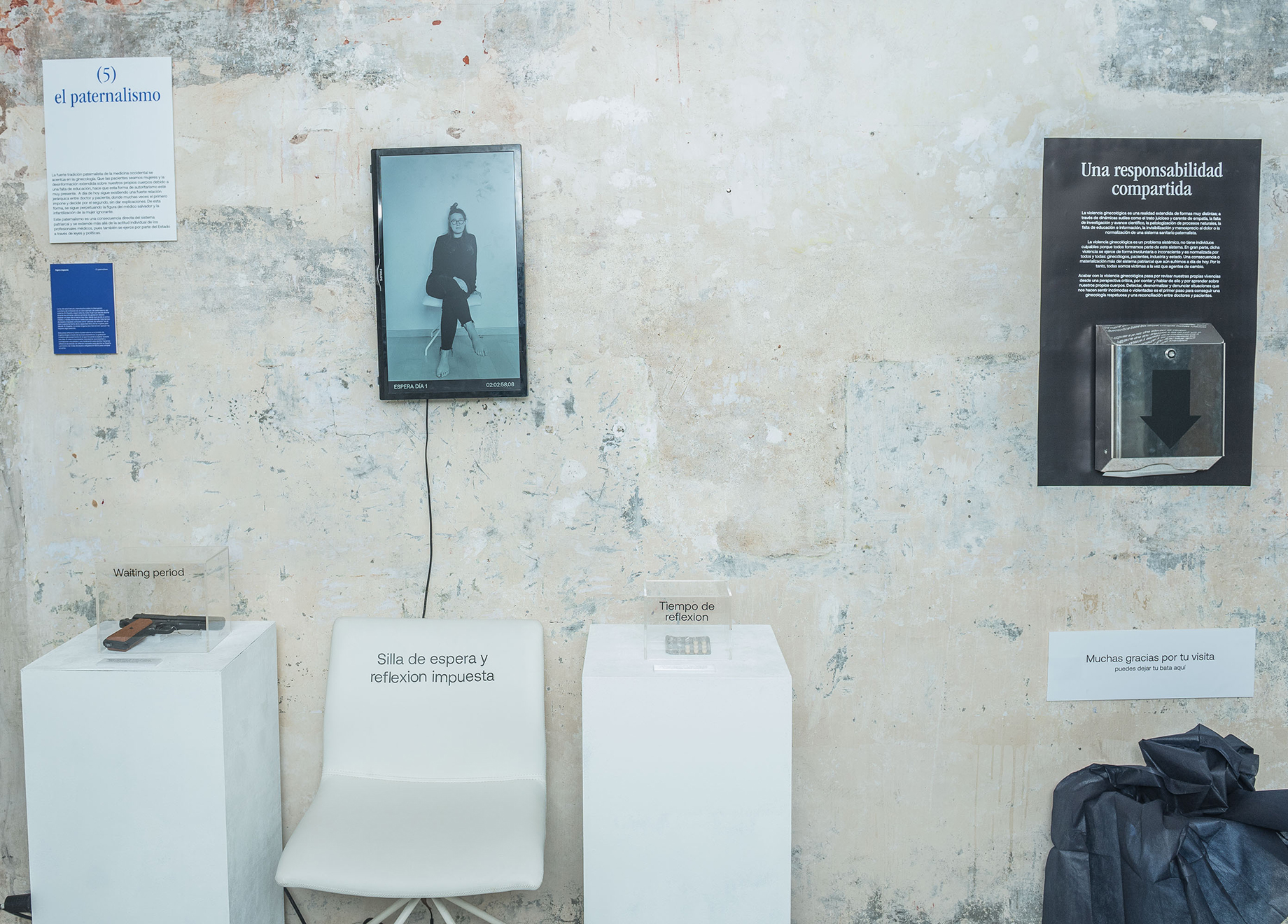 Imposed waiting
The sexual and reproductive health law on voluntary termination of pregnancy is a clear example of the paternalism of the system. In Spain, according to this law, every woman who decides to have an abortion during the first fourteen weeks of pregnancy must wait a period of at least three days, from when she goes to the medical center and receives information, until she can have an abortion. This imposed waiting time known as the “reflection period” is a clear questioning of the ethical capacity of women to decide. In Spain, there is no other intervention that, by law, requires something similar.

This piece reflects on paternalism in the field of gynecology through the experience of waiting. The recording shows an experiment in which I sat waiting for three days. The video is accompanied by two bases that expose and oppose a pistol to an abortion medication, referring to the reflection period imposed to abort in Spain and the minimum of 3 days of waiting required in the US to buy a weapon. 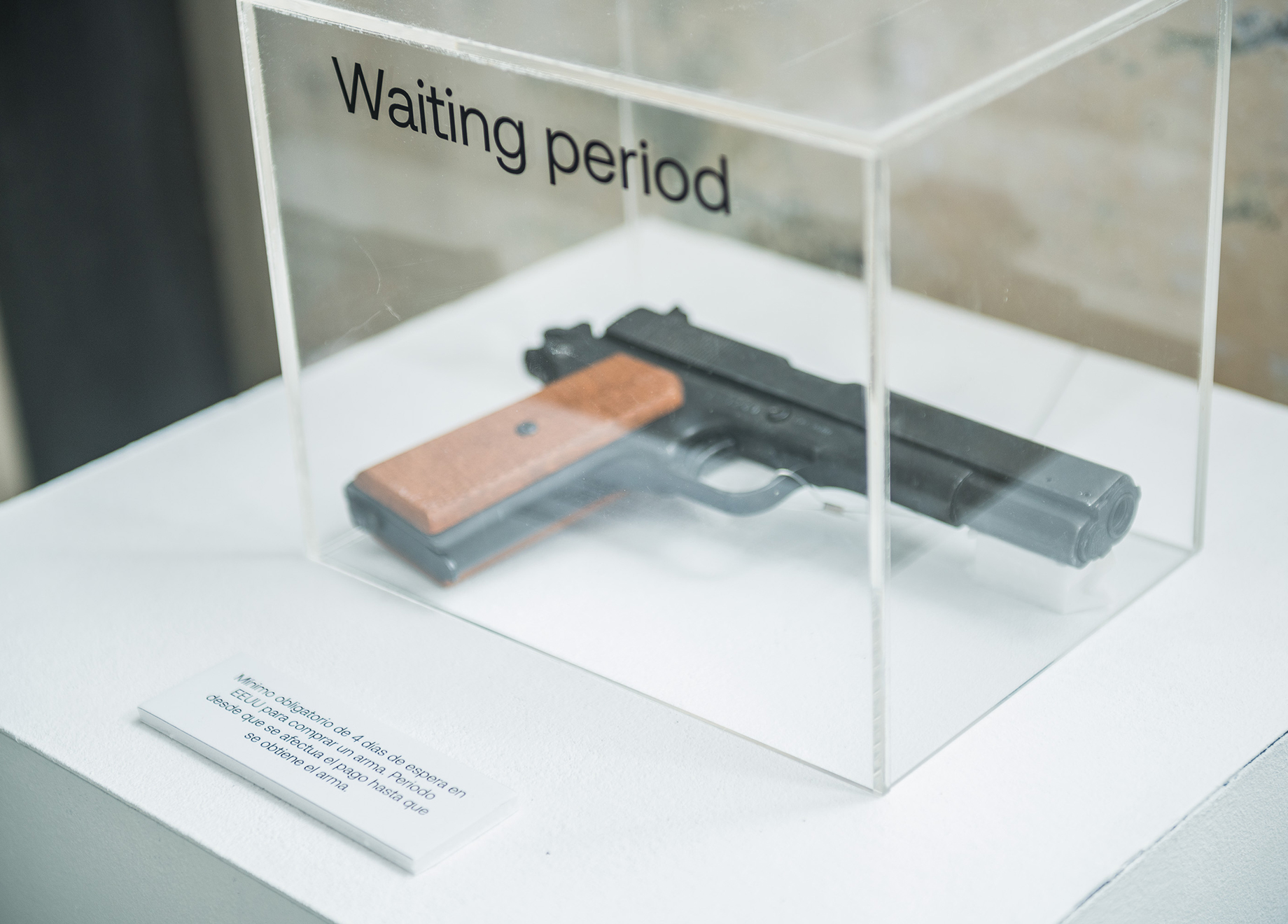 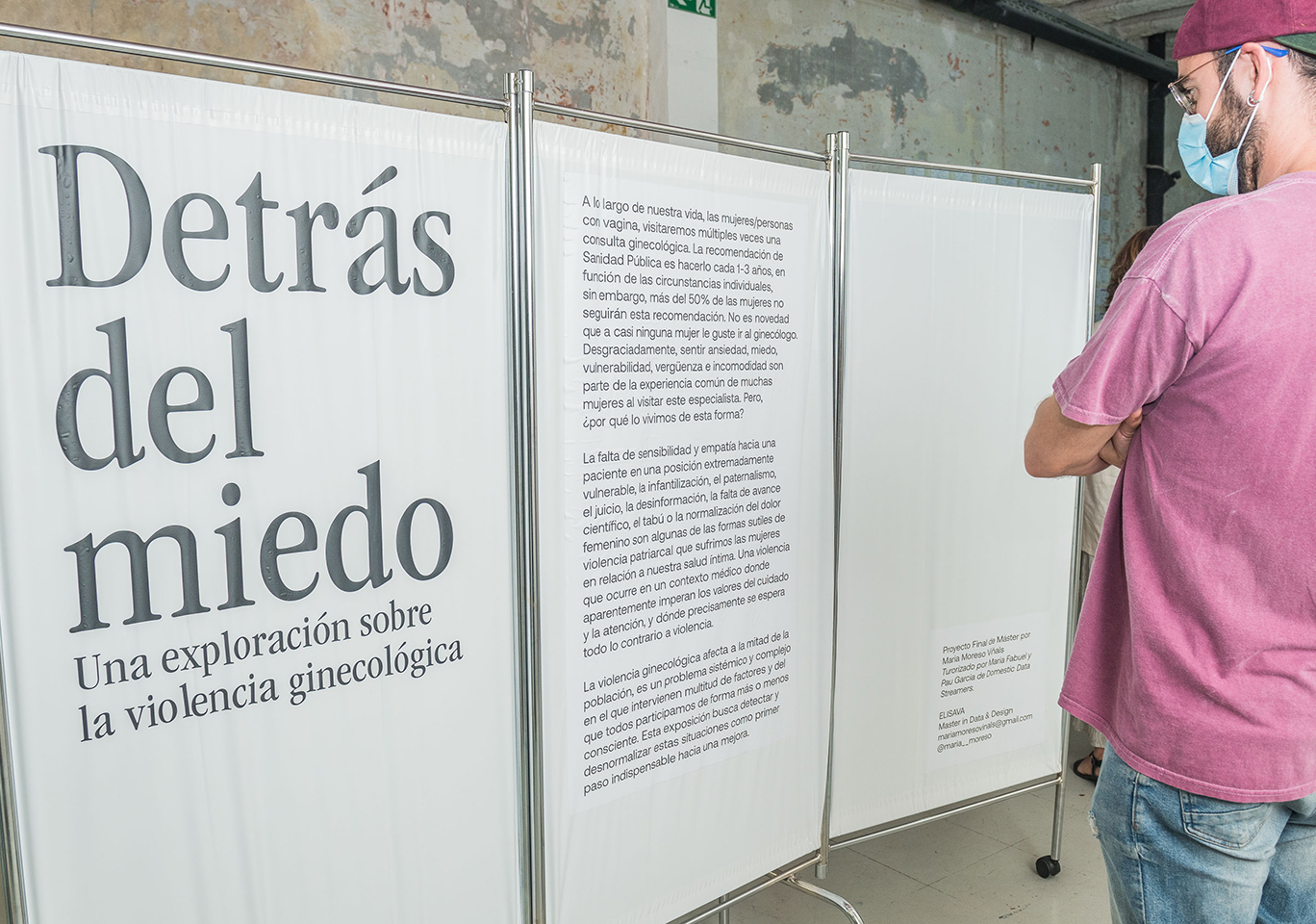 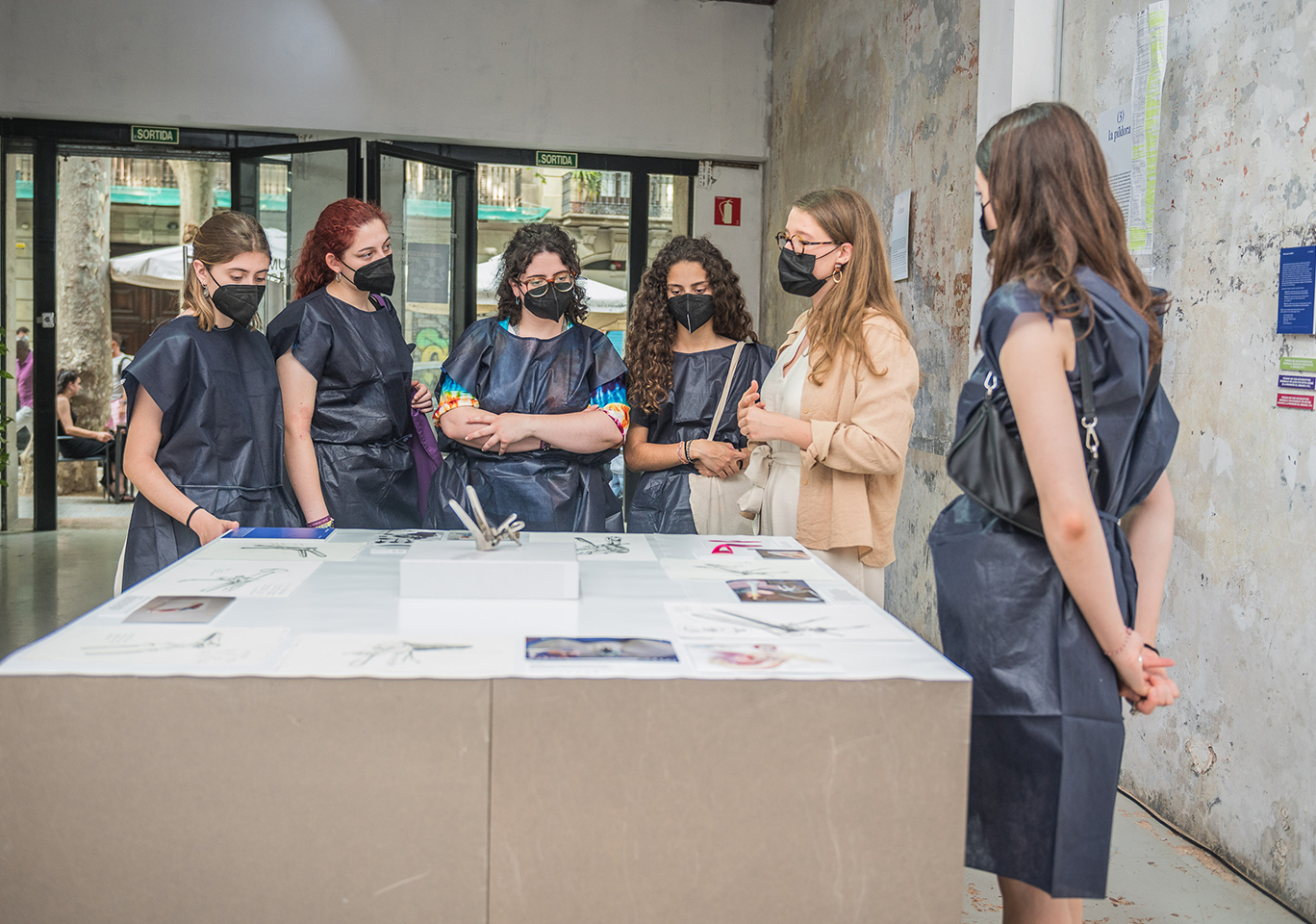 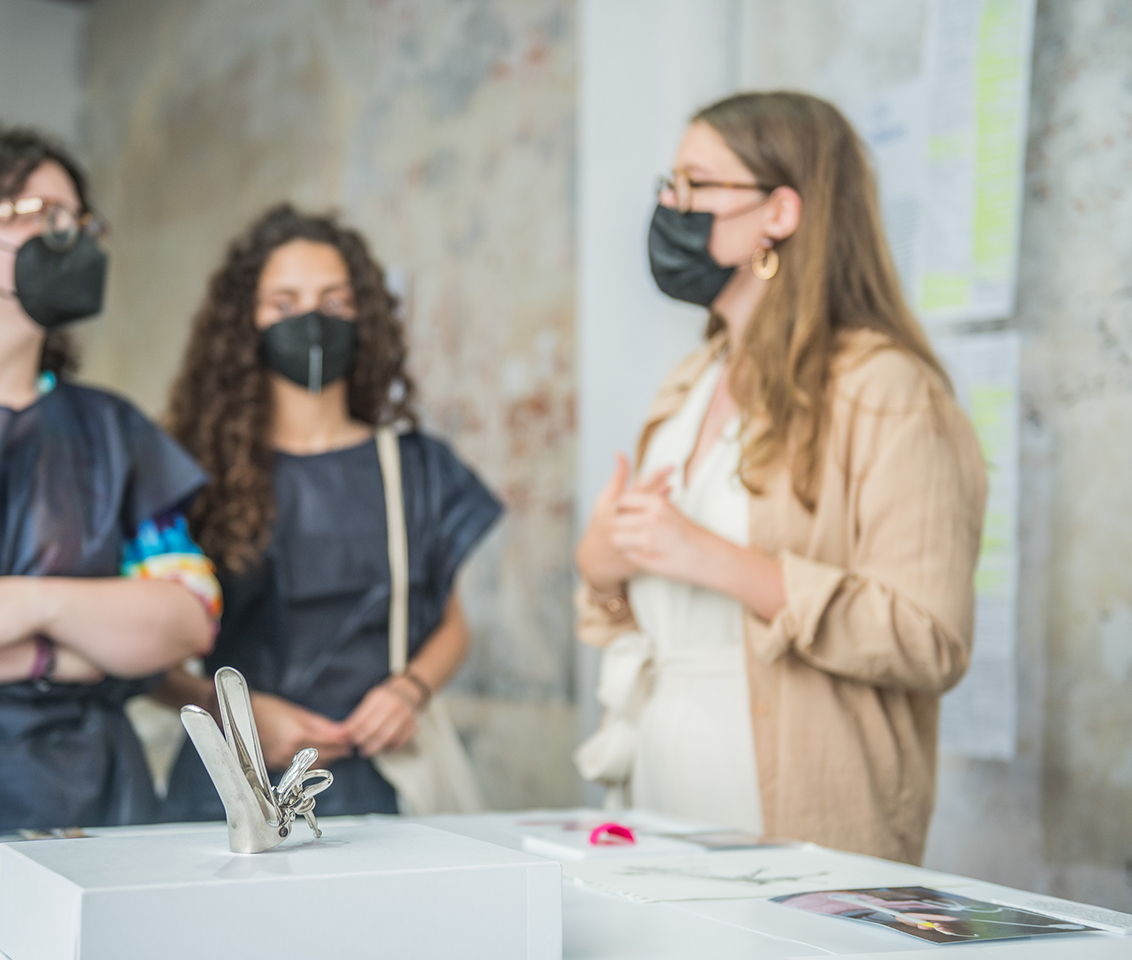 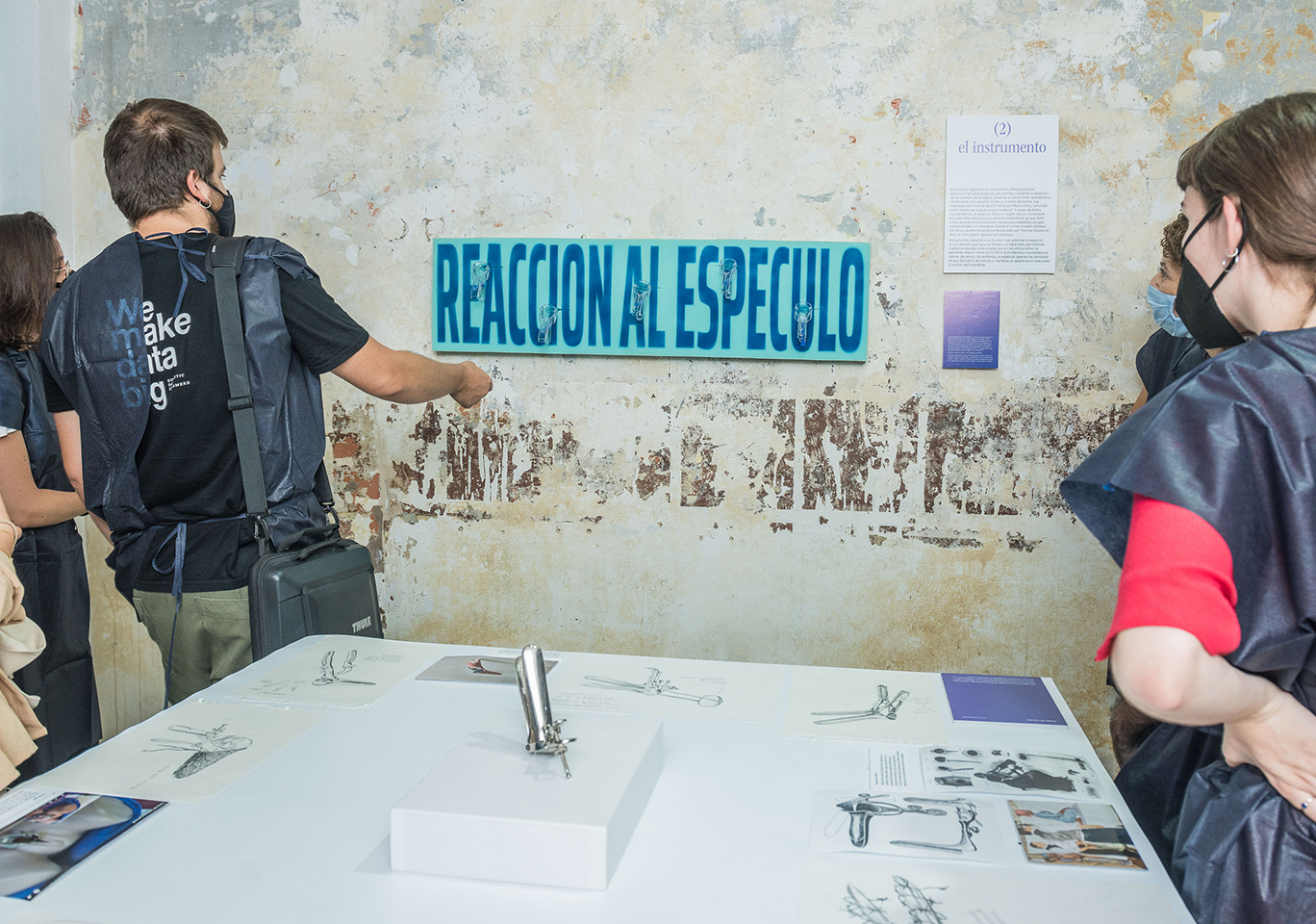 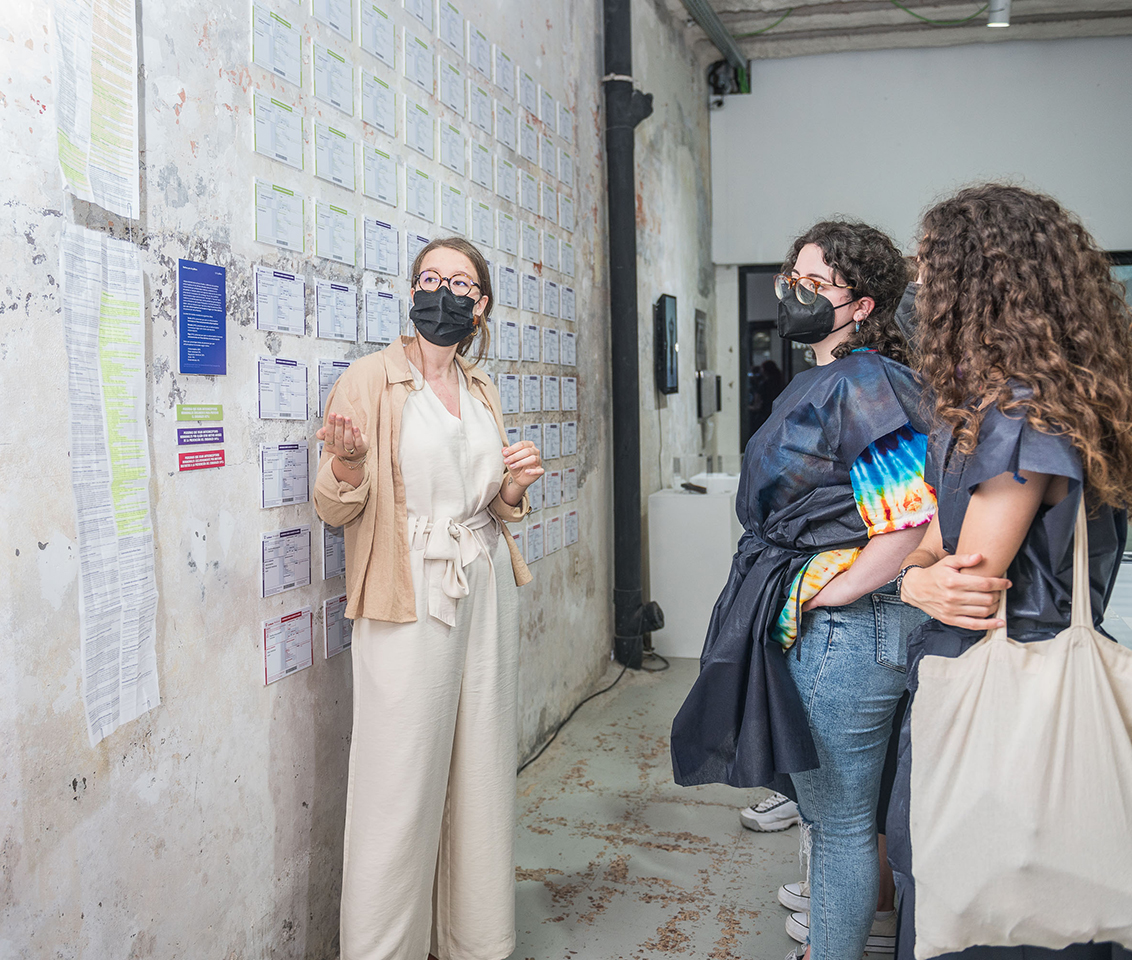 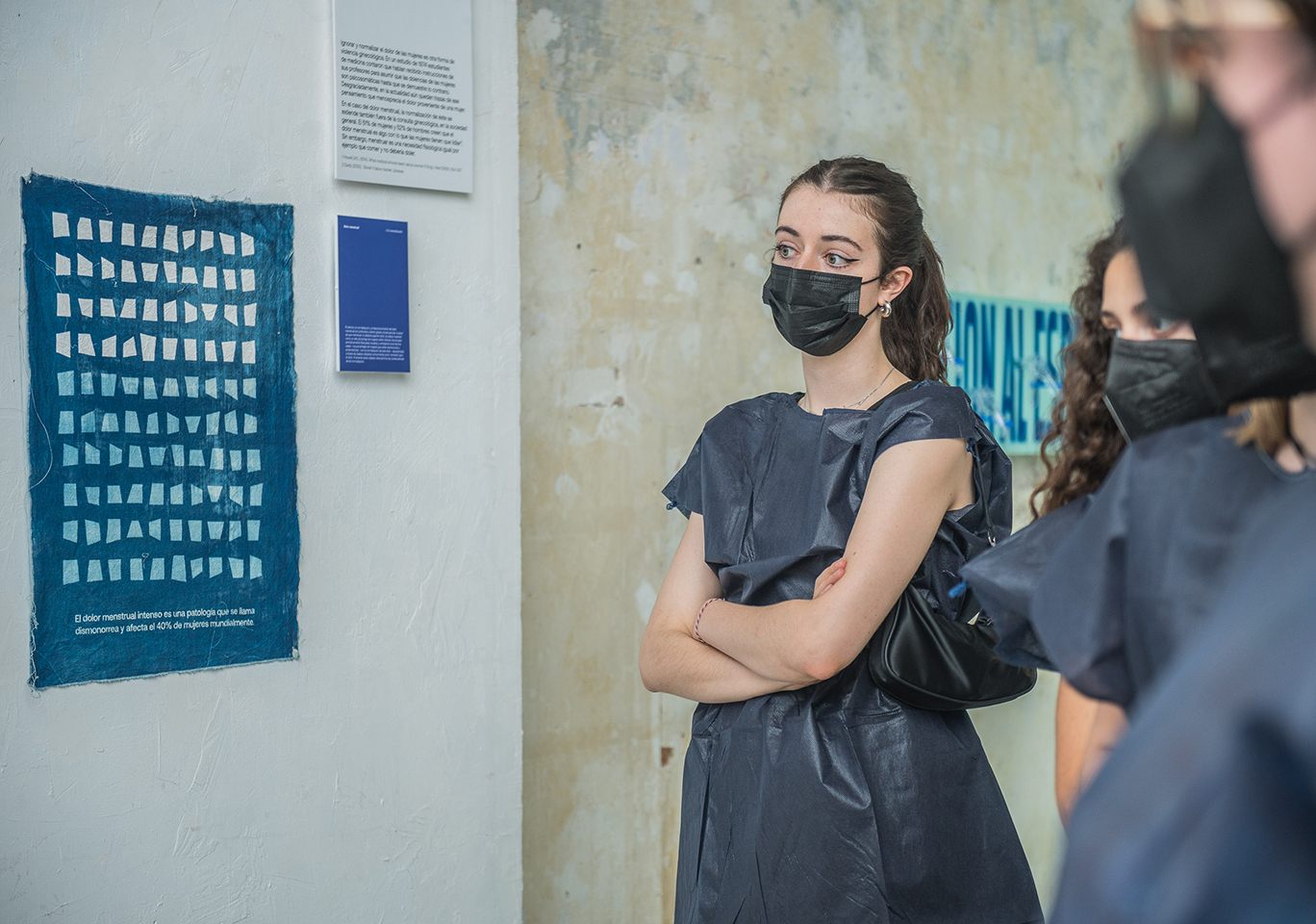 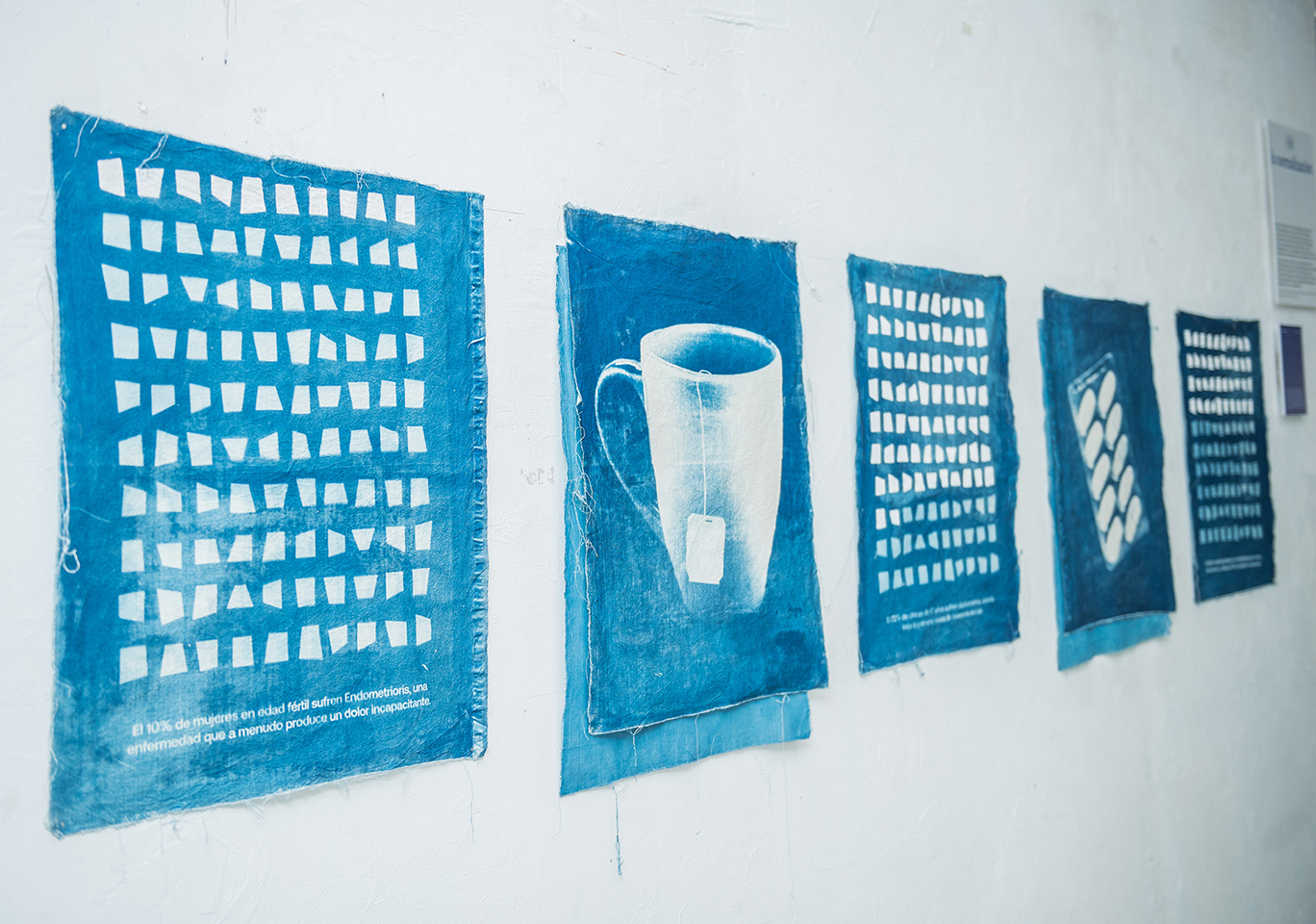